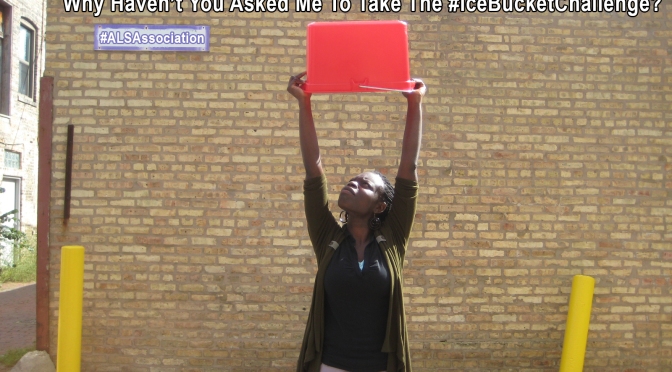 Ironically, I didn’t have a problem with it until one of my co-workers mentioned over lunch last week, “Why hasn’t anyone asked me to take the ice bucket challenge?”

So began a series of notably awkward ALS Ice Bucket Challenge moments where I personally could not relate. Which got me thinking, why haven’t you asked me to take the ice bucket challenge?

I love social media trends that are based on helping a cause, even if it’s simply to bring awareness to an issue or disease. According to the ALS Association, Amyotrophic lateral sclerosis (ALS), often referred to as “Lou Gehrig’s Disease,” is a progressive neurodegenerative disease that affects nerve cells in the brain and the spinal cord. Motor neurons reach from the brain to the spinal cord and from the spinal cord to the muscles throughout the body. The progressive degeneration of the motor neurons in ALS eventually leads to their death. When the motor neurons die, the ability of the brain to initiate and control muscle movement is lost. With voluntary muscle action progressively affected, patients in the later stages of the disease may become totally paralyzed. Currently, there is not a cure or treatment for ALS, and the cause is not fully understood. However, the FDA approved drug riluzole and others in clinical trials may slow the progression of ALS.

Knowing this, I have my own concerns with the #IceBucketChallenge. A primary concern being that it will be hard to replicate such a campaign next year since it mainly focuses on our egocentric approach to social media. This reminded me a bit of a “cool society” approach to marketing. I’m not necessarily sure it’s a bad thing given that most people now know what ALS is and hopefully have decided to give and/or pour ice water over their heads. While most of the people I’ve questioned about their experience with the ice bucket challenge find the appeal of the challenge to be the humor of pouring cold water over ones head, they do often remember that it is for the ALS Association.

The second concern I have is purely personal. Sorry, when I was in Kenya I felt as though I was pouring ice water over my head every morning as I took a shower at my grandmother’s house in Karateng. I often imagine asking my parents to take the challenge and their response being to remind me of all of those ice cold showers they took growing up. Still, there was something appealing about watching my friends scream, jump and laugh as they poured cold water (with and without ice) over their heads, or had a mischievous person do so in the background. It reminded me that we’re all human, that we all want attention of some sort and are willing to look silly for what we think is a good cause. It also reminded me of how some can feel left out of such a campaign that requires others to nominate you. My co-worker noted that she wishes she didn’t have to be nominated and I laughed at the idea of waiting for someone to nominate you for such an uncomfortable experience.